The lake of knowledge 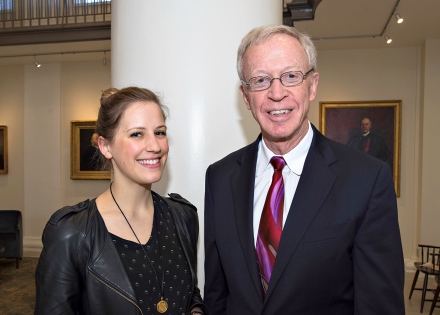 > Dr. Eriksson, after studying in Sweden, why did you come to the US?

There are two things that brought me here: First of all, I was interested in the foreign system outside of Europe and therefore decided to do my residency in the US. Second, my mother had an American citizenship and we had a lot of relatives in Arizona regularly came to visit and vice versa, so there always was a connection to a live outside of Europe.

After being in Chicago and Virginia I went back to Sweden where I worked two years as what you call “Dozent”. Then I got an offer to come to the BWH and took it. It is a great hospital and I always had extremely capable colleagues – until today.

> What kept you here in Boston?

I have been in my position here for almost 29 years. There have been several offers in the last years I was considering – and I always came to the conclusion that staying in Boston at the BWH is the better option. My children were pulling in that direction as well, as they were going to school here. And I think it is a very stimulating surrounding here in Boston. It has kind of a British flair.

Of course you miss people, friends, family. But we feel at home here now.

> What are the main differences you perceive in American medicine compared to European medicine or let’s say in the attitude of the people who work here?

There are many things to take into account if I would want to answer that question and compare the systems. But if I would want to sum it up, I would say the American attitude can be described as “optimism”, whereas many European countries can be characterized by using the word “envy”.

> You are surrounded by a lot of Europeans in your lab team, especially Germans. Is that intended?

We always try to make a decision for good and qualified people and not their nationalities. I don’t think that the nationality makes a lot of a difference. We have a very stimulating group here and interesting as well as highly capable people. That is most important for us.

> When applying for residency in the US, nationality still matters a lot.

Yes, but that is mainly a problem of translation and organization. You have to provide an equivalent of your qualification if you want to apply for residency here. It is mainly an administrative issue.

> What would you recommend any med student or young surgeon to be aware of when starting his or her career and trying to find their way? How can one find out what is the “right” thing to do?

When I would have to sum it up to one thing, I would say that the inner self is most important. At your age, at any age, you try to be very intellectual, rational and think of what is the best solution. That is not wrong, but in the end the most important is to rely to your heart and do what feels right. Trust yourself when taking decisions – you know yourself the best and will do fine with that. I myself have always done perfectly well with that. So trust yourself.

> Did you have an idol or mentor that helped you finding your path?

To be honest: No. I listen carefully to what people tell me and take their opinions into account, but I have always taken decisions on my own and never done exactly what someone told me.

> The classic question: Why Plastic Surgery?

For me early in my medical studies it was clear that I wanted to do surgery. It the beginning I was always thinking of doing Cardiac Surgery. But after some time I thought this would be boring and I would end up doing four or five of the same procedures every day. I disappointed a lot of people by not doing that. But once again – you have to do what feels right. Plastic Surgery deals with all parts in- and outside the body. I can’t think of any other discipline that offers such a variety and at the same time requires excellent technical skills.

> So that is what fascinates you when doing Plastic Surgery?

That is one of the things. The other is that we immediately see immense results doing our procedures. And we are driven by a highly innovative field, always moving forward, constantly challenging ourselves and inventing new solutions. It is a very stimulating working environment. In Plastics and especially at the BWH.

> How do you reply to prejudices that come along with that field? For example people stating that you are doing “only” aesthetic procedures.

I would tell them: “Sure, we do face transplantations too.” (laughing).

> What where the main changes you perceived in Plastic Surgery in the last years?

Well, we and our knowledge are constantly changing. What we know today will only be 50 percent of what will be known in ten years from now. I may have to illustrate that (draws graph and explains by means of that (…)). And that (Anm. d. Red.: the constant development and obsolescence of knowledge) is the imperator for all kind of innovation we are constantly dealing with.

> Where do you see the field going?

Well, if I or you would know what will be the next big thing in the future … . But nobody does. What I always mentioned as the three probably most important fields was first of all VCA (Anm. der Redaktion: Vascularizeed Composite Allotransplantation), which already became true – we do that every day. Furthermore, developments in the healthy aging of skin, especially without surgery, and in the treatment of skin cancer are topics of the future. Hopefully, there will be some earth-shaking developments concerning these latter two.

> What are the key characteristics in becoming a good plastic surgeon?

We are looking for three things when we try to find new people for our team. Number one is that they have to have a “normal” personality without any obvious psychological disorders. Second, they need technical skills which are beyond the average. And finally there has to be more – there must be one thing that contributes in making our patients life better. This could be translational research, or an innovative idea, or great skills e.g. in technical engineering. Or a passion for journalism - in the sense of being a communicator between medicine and the public or patients. Something which goes beyond the normal. This is what we search for when looking for a team member and someone who will contribute to our work and the patients’ lives.

> What do you ask in a job interview?

This comes back to what I said before, only the other way around – I trust myself when talking to people. I ask normal questions. First, I want to make them feel at ease with the situation. People come to an interview being very nervous. I often ask about their hobbies – that already tells you a lot about the person.

> What was the most challenging experience you had in your career?

Well, being a doctor always means being confronted with difficult situations. And no, there is no way of learning how to react the best. I remember one day which was probably the most burdening situation I ever experienced. There was this young boy, 16 years old, who had been shot by an assassin in his school and came to our hospital. Already in the OR (Anm. d. Red.: Operating Room) he died, we couldn’t save him. So it was my responsibility to go down to the waiting room to tell the parents. As I walked down, there were almost 75 people who were waiting for him. They were friends, family, people from school etc. Some of them had seen me taking care of him and so all these people started screaming at me at the top of their voices and were asking about his condition and wellbeing. The even more tragic part of the story is that the young boy was mainly a by-stander. The shooter came to the school to kill somebody else. So I was standing there among all these people and the young boy was dead.

I searched for the family – the parents and siblings of the young boy and took them with me to talk to them in private. It took maybe half an hour but was definitely one of the worst experiences I had. And again, there is no recipe to be prepared for events like these. They are part of a doctor’s life.

> What drives and motivates you after so many years of work?

That is actually a very good question. Well, when you think of knowledge as a lake (illustrates it), then during your studies you only go that far (shows it on the illustration- only a small area under the top) under the surface. And you get the feeling that you are getting even more superficial every year of studying. But at some point you want to go deeper. You want to really understand a field which interests you, go very deep until you reach the ground and at the same time you want to find out how far it goes to every side of the lake. And it takes five to ten years to really understand a field and gather all the knowledge there. So maybe this is my main drive after so many years: Exploring the lake of knowledge.