Total Syntheses of Shizukaols A and E

Shizukaols A and E, two dimeric lindenane-type terpenes, were isolated from Chloranthus japonicas. Both possess a common heptacyclic framework containing more than 10 contiguous stereocenters with potential biological activities, which has attracted a considerable amount of interest from synthetic chemists. However, only one total synthesis of two dimeric members, shizukaol D and sarcandrolide J, was reported by Professor Bo Liu and co-workers in 2017. Recently, Professor Xiao-Shui Peng from The Chinese University of Hong Kong, together with Dr. Bencan Tang from the University of Nottingham Ningbo China (P. R. of China), have reported the total syntheses of shizukaols A and E via a biomimetic synthetic approach. Among the research priorities of the authors are, in fact, the design and accomplishment of a “bio-inspired” total synthesis of structurally complex and biologically significant natural products, and a better understanding of their biological action and biogenetic synthetic approach.

Read the full article Total Syntheses of Shizukaols A and E 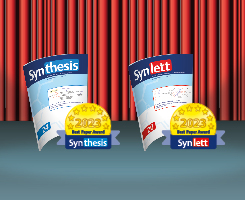