On June 29, 2019, the chemist Professor Dieter Enders passed away at the age of 73 in Aachen following a short period of illness. He was a key figure for Thieme Chemistry and a great scientist, serving as Editor of the Thieme journal SYNTHESIS since 1985. During this time, he significantly shaped the journal, which informs readers on scientific developments in synthetic chemistry.

Dieter Enders started working with the Thieme Group as an Editor of SYNTHESIS in 1985, serving as Editor-in-Chief from 1998 to 2013. After 2013 until his death, he continued working as Editor for Review articles. “Professor Enders was passionate about his research field and the promotion of young scientists,” said Dr. Susanne Haak, Managing Editor of the Thieme Chemistry journals. “During the three decades of his work for SYNTHESIS, he had a decisive influence on both the journal and the performance of the whole editorial team. His expertise, commitment and presence will be sorely missed at Thieme. We lose a valuable member of the Thieme family and a particularly fine man.”

In early 2017, we published a SYNTHESIS Special Issue dedicated to Dieter Enders on the occasion of his 70th birthday.

Professor Enders was born in Butzbach in 1946, Hessen, Germany. He studied chemistry, obtaining his doctorate in 1975 at Justus Liebig University Giessen. Following a period of research under Nobel laureate Elias James Corey Jr. at Harvard University in Cambridge, Massachusetts, Enders was appointed Professor of Organic Chemistry at the University of Bonn. In 1985, he accepted a position at RWTH Aachen University, heading the Institute of Organic Chemistry until his retirement in 2014. He continued his research, funded by the European Research Council, until shortly before his death.

Enders played a significant role in the development of organic chemistry in Germany. His work focused on the development of selective new methods in asymmetric synthesis and their application in natural product and API synthesis. He was one of the pioneers in the field of stereoselective synthesis, particularly in diastereoselective carbon–carbon bond formation using the amino acid derivative (S)-prolin, later named after him as Ender’s Reagent. Enders received numerous national and international awards for his work, including the Gottfried Wilhelm Leibniz Prize, the Max Planck Research Award for Chemistry, the Yamada Prize from Japan and the Arthur C. Cope Scholar Award of the American Chemical Society. 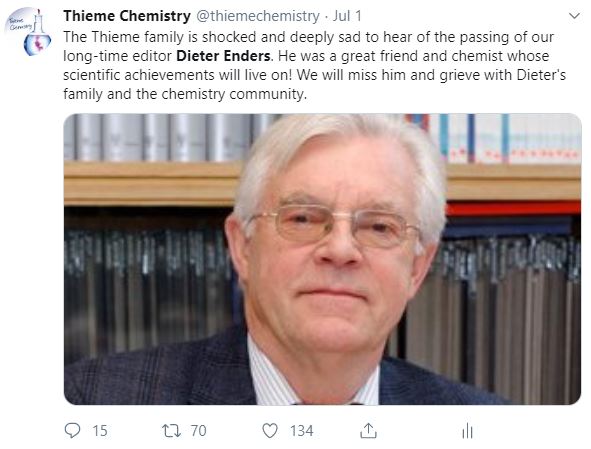